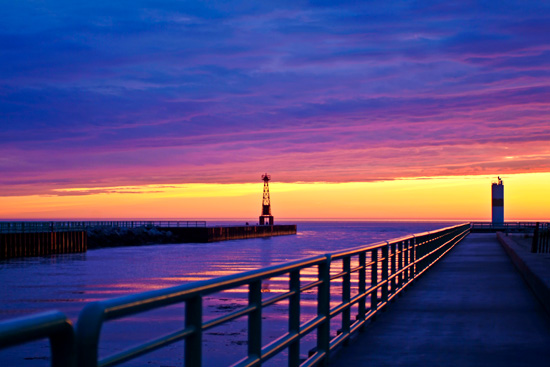 The North and South Pierhead Lights serve as beacons to guide pleasure boats into Pentwater's harbor during the busy summer season.

Take US-31 into Pentwater. Turn west on Lowell Street at the north end of town, and head 1/2 mile to Charles Mears State Park. There you can walk the beach to the pierhead light. 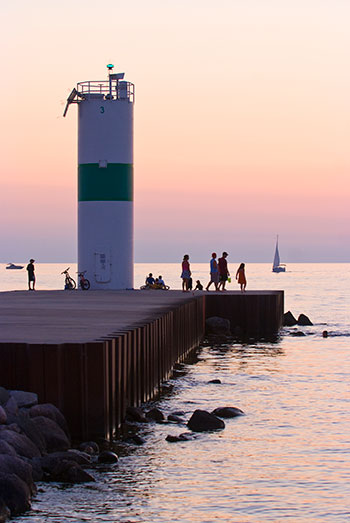 Photo by ToddAndBradReed.com
Established in 1890 and 1873 respectively, the lights have undergone numerous changes throughout the years. Between 1856 and 1858, Charles Mears and his crew excavated a shallow channel that would allow boats to haul lumber from his mill out to Lake Michigan. The steamer DAYLITE became the first large vessel to navigate through the channel into Pentwater Lake. As more mills moved into the area, Mears and Michigan senators lobbied for harbor improvements, finally receiving the funds in 1867. These improvements included widening and deepening the channel, along with extending the piers. It was determined that a light was now needed to help guide vessels into the channel. A 12-foot timber-frame was built in 1873 on the south pier, and contained a red Sixth-Order Fresnel lens, visible for 8 1/2 miles. Local resident Francis McGuire became the first keeper of the Pentwater Light, and after four years, his wife Annie took over the job.


The Army Corps of Engineers replaced the timber piers with concrete in 1937, and the South Pierhead Light was replaced by a steel skeleton tower. Fifty years later, in 1987, a tower was erected on the north pier, and outfitted with a 300mm flashing green Tideland Signal optic; it also included a fog signal.

Grand Traverse Light Station -- Located on the tip of the Leelanau Peninsula in Northern Michigan, The Grand Traverse Light was established in 1852.
Point Betsie Light Station -- Nestled in a dune just south of Sleeping Bear Dunes National Lakeshore, the tower stands 39 feet tall, but with the height of the dune it towers 52 feet above Lake Michigan.

Manitowoc North Breakwater - Walk out to the end of the pier to this Manitowoc lighthouse, and wave to the carferry S.S. Badger as the ship passes by.
Algoma North Pierhead - This lighthouse can be seen all along the Crescent Beach Boardwalk and is accessible via the pier if you want to venture closer.
Kewaunee Pierhead Lighthouse - Located in Kewaunee, Wisconsin...halfway between Sturgeon Bay and Manitowoc along Lake Michigan.